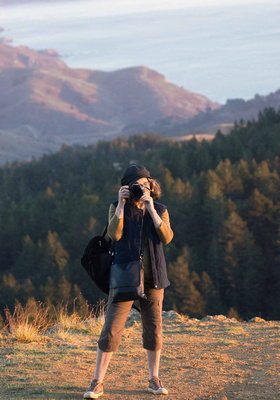 My current work centers on composition—working with forms and light to produce beauty, tension, and sensuality. My work has evolved over a few decades from traditional, representations—particularly portraiture—to more abstract forms that may provoke multiple interpretations. My photography is an extension of my own journey, which I simply call paying attention.  Tree branches that mimic a human embrace, the inner workings of a piece of fruit, or rock formations that appear to be intentionally rendered offer layers of meaning.

Becoming keenly attentive to the natural world that we humans continue to conquer, abuse, or ignore allows us to appreciate our interdependence.

Although I work with digital technology today, my aspiration is mindful viewing requires no alteration.

I began my studies in photography in high school.  Later, I moved to documentary film direction and production. Typically, these films told small stories of large social tensions that  were taking place in Central and South America where I was living at the time. I also filmed and directed commercials for television.

I took a long hiatus from photography and film and worked as a research psychologist and professor of human development for a long time. I re-entered the field at the dawn of the digital era. Since then, my work has attempted to combine what I learned about ethics and aesthetics with visual imagery to celebrate the essential place of the natural world in fully experiencing ourselves.